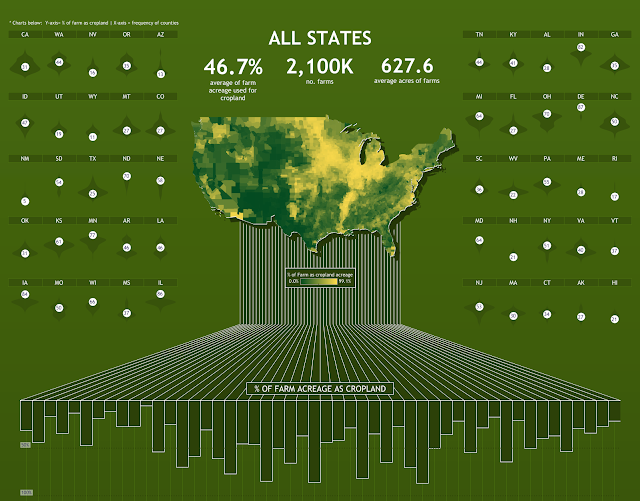 The following is a guest blog post I wrote for Kevin Flerlage's own blog site, now at www.flerlagetwins.com; Kevin has kindly agreed to let me re-publish this to my Reflections In Design site, this was my first blog post ever!

In this post I would like to run through a particular section of my IronViz entry Sowing Seeds in America (which like this blog, was also a first IronViz entry for me).


My IronViz focused on how geography of the United States affected where different crops were being grown.  In particular, there were three main elements to the viz:


1) I wanted to give context to the data we were seeing.  I tried to do this using a translucent choropleth map, overlaid on a Mapbox map that accentuated the hills and mountain ranges of North America.


2) I also wanted to dig into how the percentage of crop per farm acreage differed between states and give indications on the distribution of the same measure for that state’s counties.


3) Finally, I wanted to explore each state by showing all crops within that state and compare how an individual crop type was favoured across the country.

I personally feel that an important part of storytelling is to aid the flow for the reader - to help them through the viz and not over-complicate the analysis to which point you may lose your audience.  Therefore, my desire was that sections 2 and 3 were to be linked with interaction.  I wanted to avoid having a heavily sectioned design to the viz.


To create flow between middle and bottom sections, I decided to create lines that gave the viz some form and flow vertically between the sections.  I decided to use strong straight lines going down and out, because I felt they connected well to the story and data, were geometrically interesting and I felt the lines resembled drilled crop lines in a field.  In addition, I added drop-bar analysis and some more subtle curved lines to draw the eye in from the drop-bar chart to the single state map below.  Finally, I added interactivity to highlight the bars when a state was selected.


Calculating Coordinates for “The Flow”

How did I create the lines that connect from the US Map at the top to the drop-bar chart below?  The good news is it is surprisingly simple!  I did this using Excel.  There were NO Tableau calculations required!


The next few images will give you an idea of where I started with this viz and the initial colour scheme I was working with (I went back and forth on my colour palette, so throughout this blog post, you will see varying colours, mainly browns and greens).   At the time of creating the lines, I knew the space I was working with under the map so I knew how big I wanted to make them (highlighted with the yellow box). 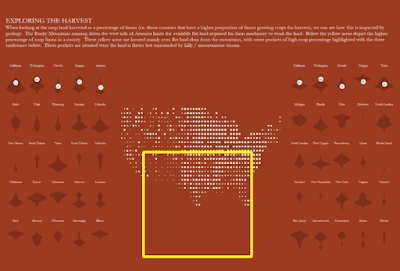 With this in mind I knew that I had a width of 400 pixels to work with at the top.  The wider section below, however, would stretch across most of the dashboard.  I decided to utilize 1500 pixels for this leaving 50 pixels from the edges.  The lines would be created using polygons, which is the same technique I used to create the Polygon Lion image in my vizforsocialgood viz.


To create these polygons, I needed to find seven points for each state to aid Tableau in drawing the polygons and put them in Excel as a new data set. Below is a rough sketch (forgive me as this was drawn around 1am in the morning!).  This shows each point of a single polygon.  Sketching this out helped me work out the calculations required to quickly produce all seven x-y coordinates for each of the states. 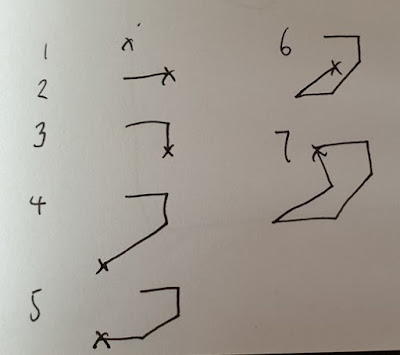 As mentioned, I knew that the space I had at the top was 400 pixels wide and the space I had at the bottom was 1500 pixels wide.  From here I needed to work out where I would start the first point for the first polygon state.  Below is a drawing that I created when I had more sleep.  It shows the seven points required and I’ve provided a breakdown of how I calculated the location of these points for the first state polygon. 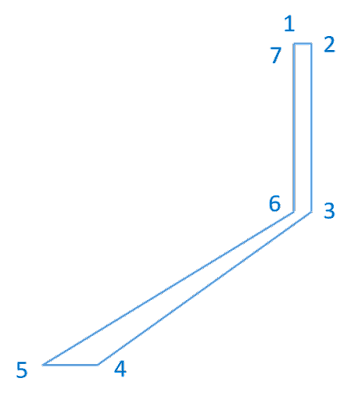 
The bottom portion of my polygon chart was set to be 1500 pixels.  This 1500 would act as my X axis…so I would have x axis figures running from 0 to 1500.  I wanted to have the upper section (400 px width) centred perfectly over the bottom section (1500 px width).  So I had to figure out where the first point on the top section would line up according to the 1500 px bottom section.


Point two was just slightly to the right of point one.  All I did was divide the total number of pixels for the top section by the number of states to determine how wide each polygon would be at the top – 400 / 50 = 8 px.  So to find the 2nd point of the polygon, I simply added 8px to the x-coordinate of the 1st point and y remained the same.  The result was an x-y coordinate of 558,0.


Point 3 was directly under point 2 so we know that this point would share an x coordinate with point 2 (558).  For the y coordinate, I simply estimated what would be fit my space.  I ultimately landed on 410.  Now remember that we started at the top with a y coordinate of 0 and now we are below that line.  That would, in theory, mean a negative figure.  For now, we are going to use positive numbers and just reverse the y axis when we build the chart.  So, the x-y coordinate of point 3 is 558, 410.


Well, let’s skip point 4 for now and come back to it because it will be much easier to calculate once we have point 5.


Point 7 is our last point required to join the polygon.  This has the same coordinates as point 1, 550,0.


That is now the 1st polygon drawn.  To draw the other 49 states, I used a little maths:

Point 2 of the next polygon) follows the same rules above, add 8px to point 1 on the x-axis


The starting points and math was built out in Excel then copied/pasted down the sheet until all 50 states were plotted (see image below).  For your viz, you can create any shape you want and it doesn’t have to be straight lines.  The takeaway here is the technique, not the exact calculations and shapes that I used. 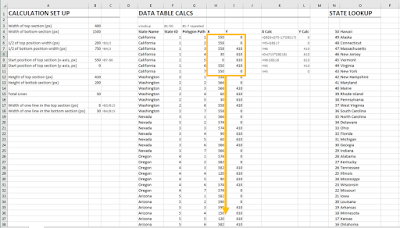 Now that I had all the coordinates, I was finally able to bring this into Tableau.  I opened a new Worksheet and connected to the Excel file as a new data source.


In the worksheet, I put X onto Rows, Y onto Columns, State ID onto Detail, changed the mark type to Polygon, and then put Polygon Path onto Path.  As mentioned previously, I had to reverse the y axis to ensure the proper lining up of these points.

I then blended my polygon data (primary data source on the worksheet) using State Name only to my original full dataset (secondary data source on the worksheet), and then added this also to Detail. Doing this allowed me to control this polygon chart using actions from charts that were set up using the original data set.  At this point, my canvas looked like the following: 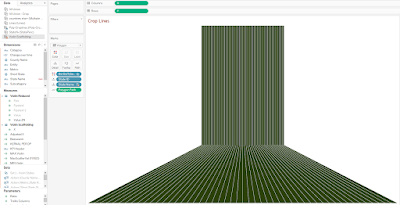 Now to add this sheet to my dashboard.  The majority of my dashboard was floating, which gave me more creative control over what was happening and layering of different charts.  I then placed this polygon chart in a position where it floated behind the choropleth map. 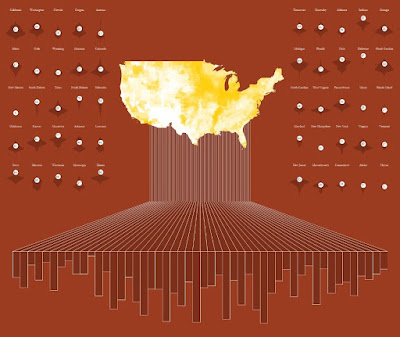 I then added a drop bar chart (a standard bar chart with the y axis reversed) to show that actual measures for each state.  These were lined up with the polygon chart.

As I mentioned above I wanted to add a more visual flow between the middle and bottom sections and I intended to do this through interactivity and colour (flash of yellow).  I used a Set Action, which was driven off of the Map and the Violin Plots.  This set action targeted a set called “Set-Croplines”, which was created on the new Polygon Data Set using State Name as the basis for the set.  The set up for both the action and the polygon sheet is shown below. 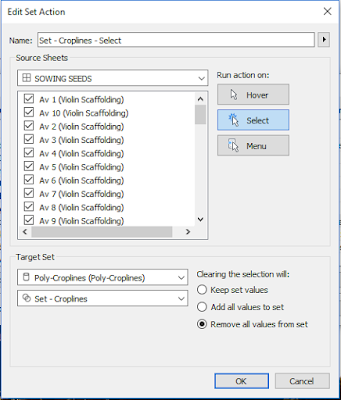 The set was then placed on the Colour Mark on the polygon worksheet as follows: 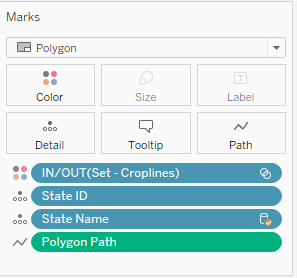 
Although I won’t go into it in this blog post, I created another data set to create curved lines that would continue from the drop bar chart to an individual state map.  This really finalized the flow.  This also had set actions applied for highlighting. 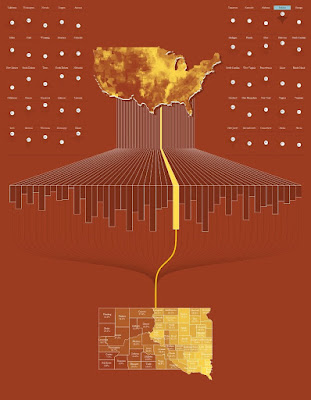 I now had a visual connection between the top US map and the bottom individual state map, which the user drives themselves.  And I was also able to simultaneously incorporate some measurements via the drop bar chart. In the end, this part of the viz was easy to follow and aided the user through the story levels within the viz.  Not to mention, it was a striking visual to focus and maintain interest in the viz.

This blog post focuses on one section of my IronViz entry, but I’d love it if you would check out the full version where I finally settled on a green colour palette. 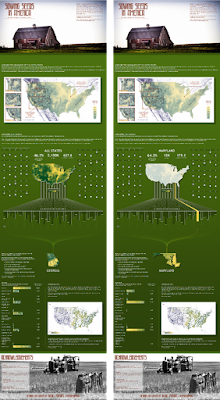 Okay, that’s it!  I hope it was easy to follow and thank you for reading my very first blog post about my very first IronViz entry.

Visit profile
Hello!
My name is Samuel Parsons, aka SParsonsDataViz.
I hope you enjoy this site, please feel free to connect via the icons below!

You can also find further content away from the blog posts in the links below.

My aim is to keep publishing new content every couple of weeks.
Thanks for visiting, I hope you will return again soon!
Sam